Efficient products for your streaming infrastructure

Softvelum Larix Broadcaster gives extended capabilities for creating content on mobile devices.
It's a freeware app however there are cases when you might want to build your own applications.
Softvelum provides SDKs for that case. Larix Broadcaster SDK for iOS is one of them.

What is included into Larix Broadcaster iOS SDK?

Having all that you will be able to create your own apps based on Larix apps, as well as include streaming capabilities into your existing apps.

The diagram below shows the key components of our Larix Broadcaster free app and the system components it uses for its work. You can download full-size picture here

Click on elements, their respective details will be shown below the diagram. 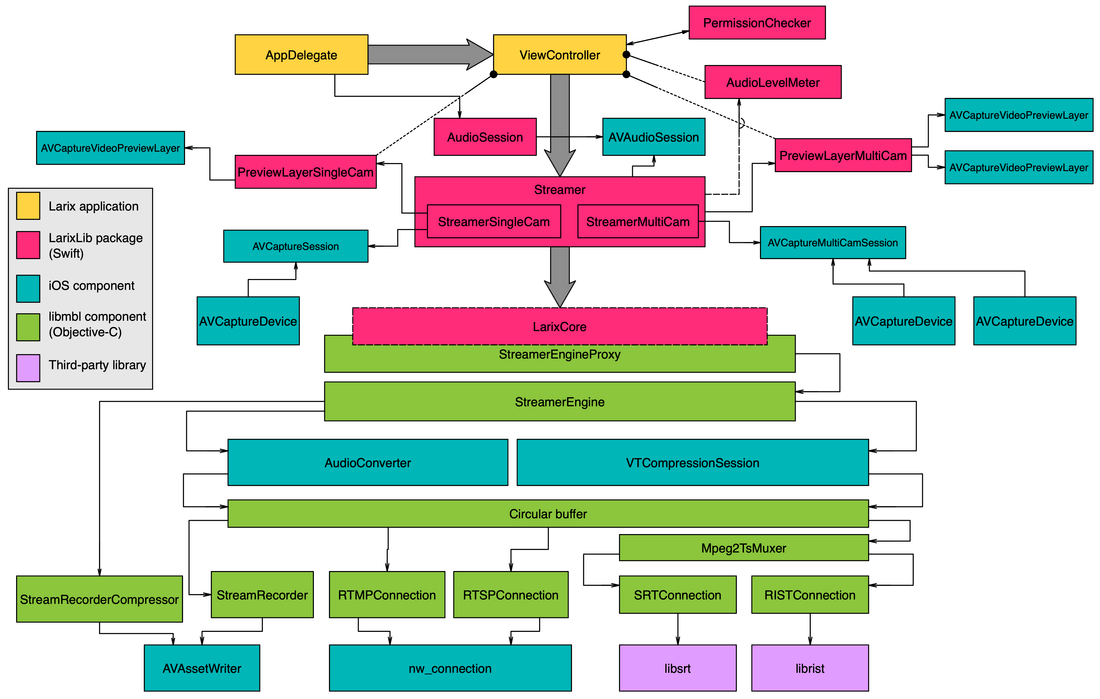 Streamer
Handles operations related to AVFoundation and binds it with Larix streamer library. Has 2 subclasses: StreamerSingleCam which handles regular AVCaptureSession for one camera, and StreamerMultiCam for AVCaptureMultiCamSession with simultaneous back and front camera handling. Also performs image manipulation (rotation, combine images) using CoreImage.

StreamerEngineProxy
Facade for Larix streaming library, all operations are performed through this class. Library is written on Objective-C, you should use bridging header to use it from Swift application.

StreamerEngine
Internal class which is responsible for compression of audio/video frames. After compression, data is placed into circular buffer and then wrapped into packets for each protocol.

RTMPConnection
Sends data to server over RTMP protocol. On iOS 12 and later it uses Network library (nw_connection), on prior version it uses CFStream.

RTSPConnection
Sends data to server over RTSP protocol. On iOS 12 and later it uses Network library (nw_connection), on prior version it uses CFStream.

AVAudioSession
An object that communicates to the system about how you intend to use audio in the application.

AVCaptureSession
An object that manages capture activity and coordinates the flow of data from input devices (camera, microphone) to capture outputs.

AVCaptureDevice
A device that provides audio or video input for capture sessions and offers controls for hardware-specific capture features.

AVCaptureVideoPreviewLayer
Subclass of CALayer that you use to display video as it’s captured by an input device.

Once you subscribe for Player SDK, you can replace it with the library from the Player package and build Larix app with Talkback feature set.

iOS SDK of Larix Broadcaster costs 300 USD per month. You pay as long as you need our updates and technical support, with 1 month minimum.
By subscribing to our SDK, you agree to SDK software license agreement.
Visit FAQ page to learn more about purchase and other questions.

Register at WMSPanel to subscribe for Larix Broadcaster iOS SDK

You can always test all features in action via our apps.
Larix Broadcaster